It occurred to me that we had never provided the specifications for our Oka motorhome on our blog, so here they are:

Our 4WD motorhome was built on a 1994 14 seat XT model Oka bus body, formerly used as a tour bus in Western Australia. It had spent most of its time touring the Kimberly area and had clocked up half a million kms. Fortunately many of the major mechanical components had been replaced or repaired during its working life so we could focus most of our time building the motorhome aspects. The only major mechanical work we had to do was on the springs and suspension.

During 2004 we removed the seats, built a raised roof and fitted it out with all the domestic facilities for 2 people, with the aim of obtaining full self-sufficiency for remote travel for up to 2 weeks at a time.

For detailed photos of the construction process for the raised roof and internal fit-out visit our photo site here, and select the topic of interest from the sub-album list on the right. 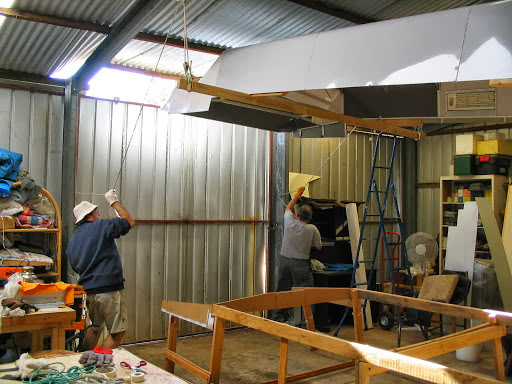 The roof being raised for fitting... 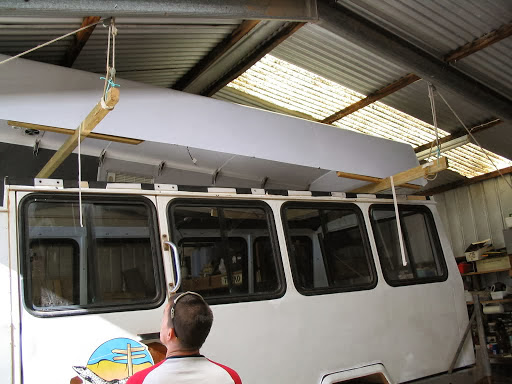 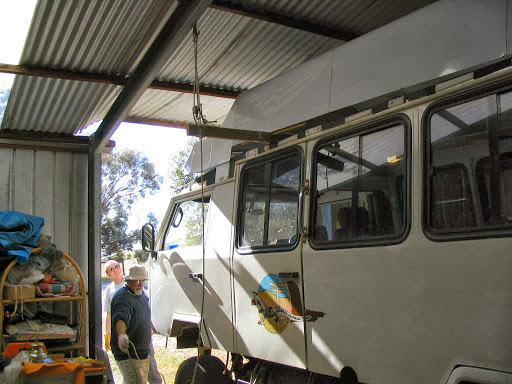 Just the support beams to remove... 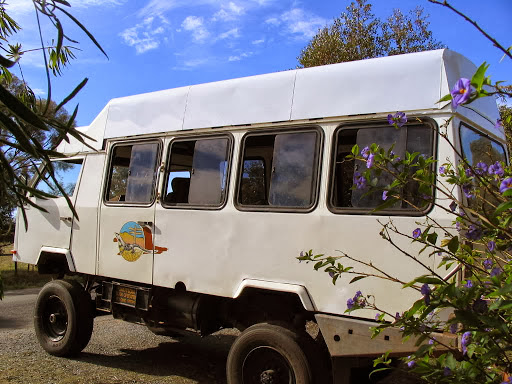 ...and the roof fitting is complete. Now for the internal fit out. 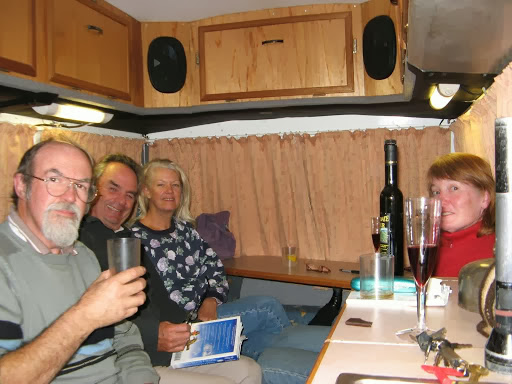 David, Tim and Brenda (Oka friends from Ocean Shores) and Janet. It was a freezing night at Ormiston Gorge so we ate dinner inside. 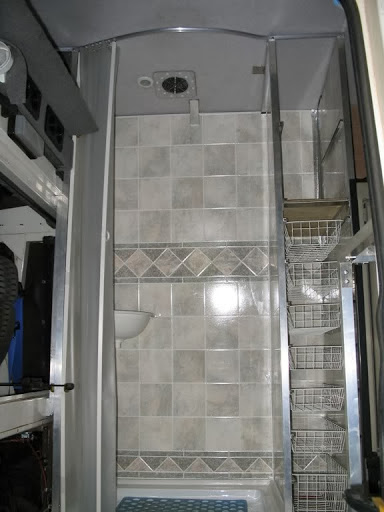 Shower walls are made of lightweight Aquatile sheeting. Pantry baskets fit between shower and fridge on the same frame. 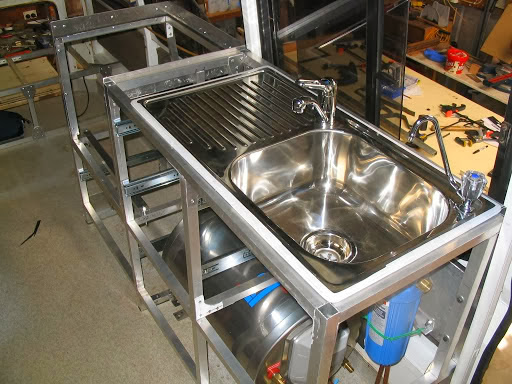 Water heater fitted under the kitchen unit during construction. 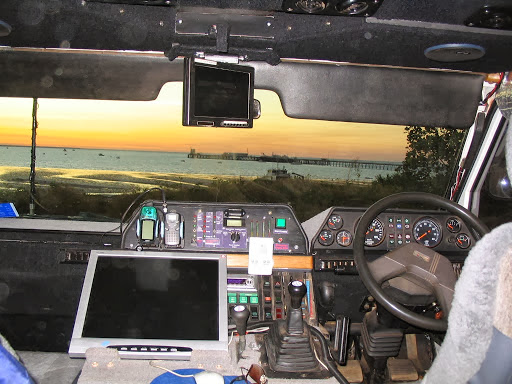 The cockpit of our Oka, at dawn, overlooking Roebuck Bay in Broome. 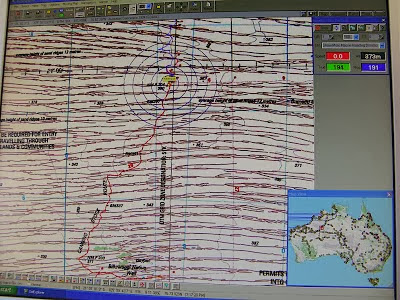 The Moving Map display shows our position in the Great Victorian Desert.

[200 w of solar panels (typically 160 w or 11-12 amps charge current is the maximum available) enables larger capacity house batteries to be used and maybe a larger inverter for a bread maker or similar. We also have  a 120 amp alternator and a smart alternator regulator, plus a water heater that heats from the engine water so we really don't need much more than this. Running the engine for 15 mins every couple of days heats the water and tops up all three batteries. In between times, up to 12 amps from our solar panels will keep the essential electrics going (eg computers, lights, pumps, fans, HF radio)]. 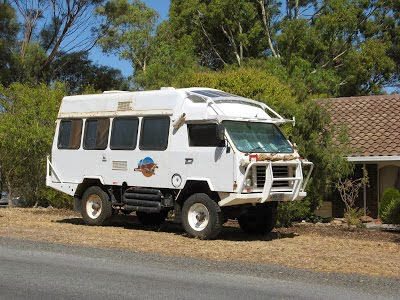 5 x 20 watt solar panels across the front. Another 5 x 20 watt panels are fitted along the roof. 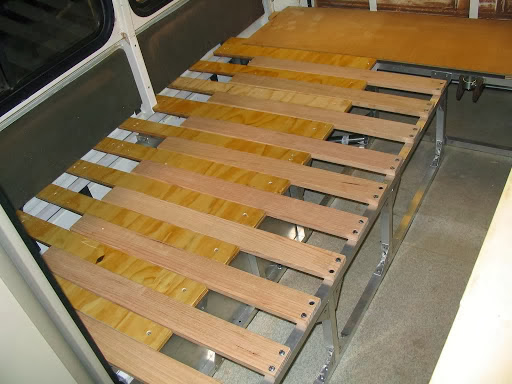 Slide out bed unit during construction. 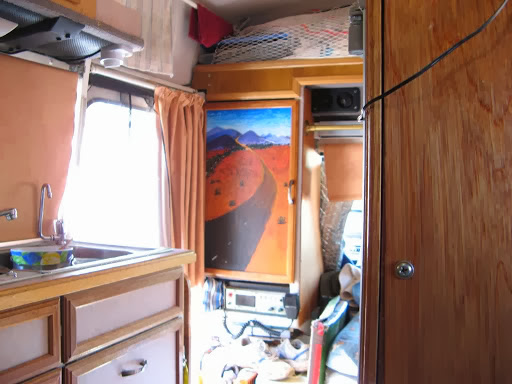 Library (with a bespoke door painting by Janet) fitted behind the passenger seat next to the entry door. 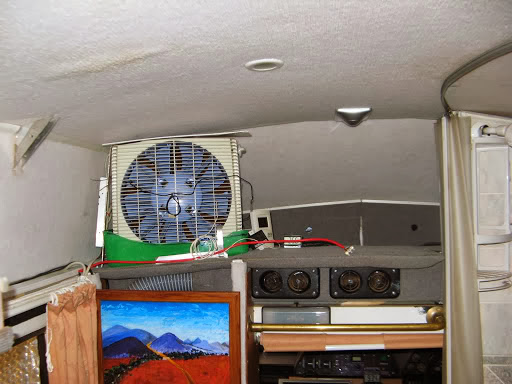 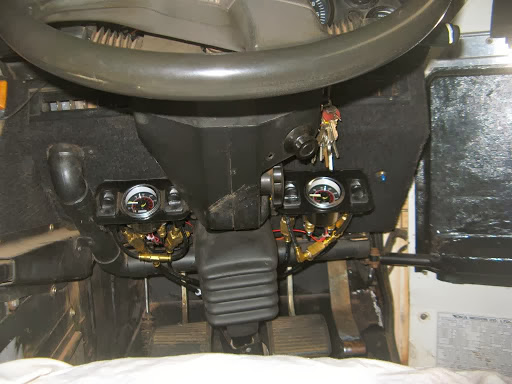 Dual airbag controls and dual needle gauges mounted either side of the steering column.

[I had a near disaster once when I accidentally started the engine in reverse gear while standing outside the drivers door. It started well, but fortunately I had just fixed the handbrake, which stalled the engine before it moved too far, otherwise the Oka would have gone though the garage wall and disappeared down a steep hill.] 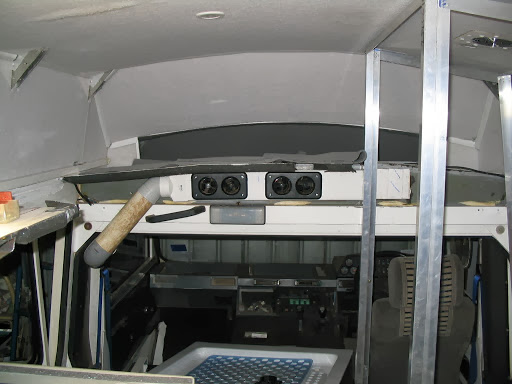 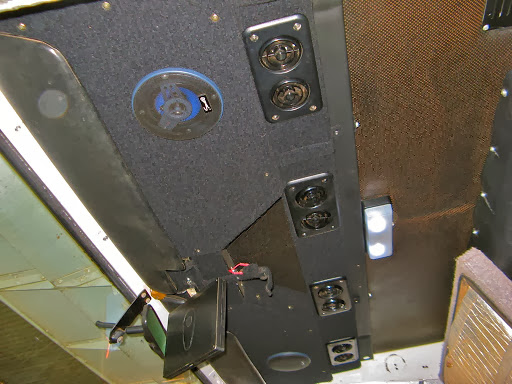 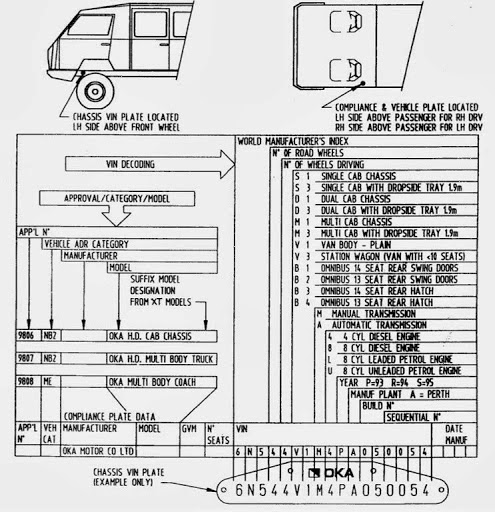 If you’d like to contact us or would like more information on our motorhome please email us at dandjribbans at gmail dot com and leave a message.