Hand Throttle for the Oka

I know various hand throttles have been described for Oka's before but most seem to need a cable and locking mechanism to keep the cable tight, and you can't easily operate them from outside the vehicle. I wanted something fairly simple for the following purposes:
You actually need quite a lot of force to pull on the top of the throttle pedal to activate it. (For example, to simulate a 5 kg foot on the end of a 20 cm throttle pedal requires a force of 20 kg just 5 cm from the pivot point). So my idea was to put a small rectangular block behind the pedal and twist it sideways against the bulkhead so that it pushes the top of the throttle pedal from the rear.
To do this I fitted a lever to a block of thick nylon from a kitchen chopping board and held it in place by a few brackets. I used nylon so it would slide smoothly across the rear of the pedal, with no wear. The lever pokes out just below the dashboard and has a few indents to set the throttle at a number of speeds. This allows me to set and clear the throttle settings from the driver seat or from the ground outside the door. 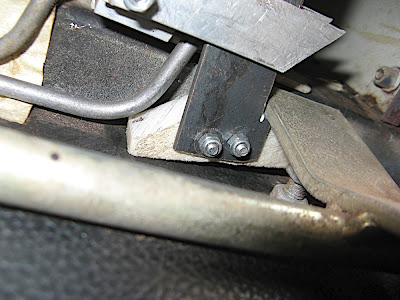 The white block of nylon operates the throttle when twisted anti-clockwise.
The nylon block needs shaping to avoid the hydraulic pipes from the brake pedal and needs brackets to hold it into position from whatever fixing holes are convenient. The fixing screws on the lever need to be very tight and their position needs a bit of experimentation to get the lever angles right. 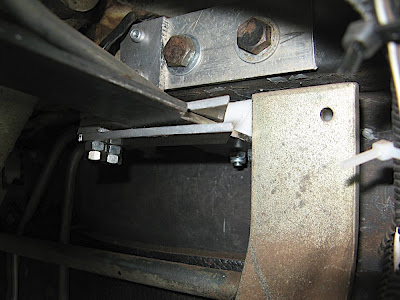 The horizontal bars hold the lever in place but allow it to slide sideways.
The lever needs to be quite strong (hence the steel bar, my initial aluminium bar broke at the indent points). 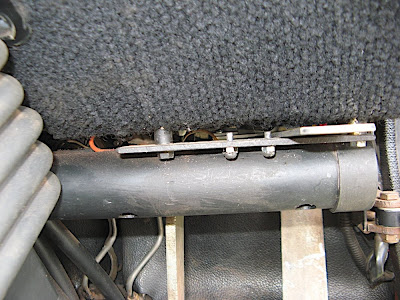 The lever in it's normal driving tick-over position. The nylon block is not touching the pedal.
[Note: The black pipe below the lever is part of a ducted air conditioning system I have fitted to transfer some warm or cool air to the driver's and passenger's feet. It's tapped into the air duct running across the dashboard. I've also sound-proofed all the metal surfaces in the cabin]The horizontal bar is spaced away from the bottom ledge of the dashboard and holds the lever in place but allows it to slide across. Holes in the bar were tapped at various locations to allow indent screws to be fitted. The lever needs to be lifted and moved left on to the screws, which match with holes in the lever, so that the speed can be set. This also prevents the lever being accidentally moved while driving. No return spring is required on the hand lever since the throttle pedal has it's own strong spring. 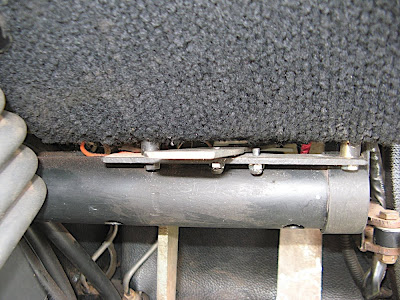 The throttle set at it's maximum position, about 2000 RPM. This position is seldom used but does limit the engine speed.
In its centre position, the engine speed is around 1000-1200 RPM, depending on its temperature, which is just what I wanted.
This mechanism has now been in use for a couple of years quite effectively, except for replacing the original aluminium lever with a steel one after it broke across the indent holes.
Posted by dandj at 17:10