Our Trip to Brisbane

In 2009 we had a lot of dramas, but none of them stopped us going up to Brisbane (actually Ipswich) in November for Janet’s cousin’s twin daughters 40th birthday bash (I wish they were more closely related, it would save keystrokes). We left on 7 November and were away for about 4 weeks, getting back just in time to not miss all the Christmas silly season stuff.

We had a really good time in Brissie, staying with Janet’s cousin. The bash was a fancy dress party and I went as a Maharajah and Janet as a Maharini. If you don’t want to see someone in a turban pole-dancing around a Hills Hoist, look away now. 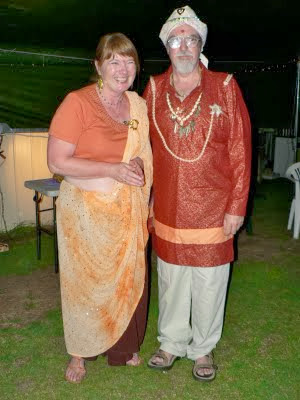 Janet and David in their Maharajah costumes. 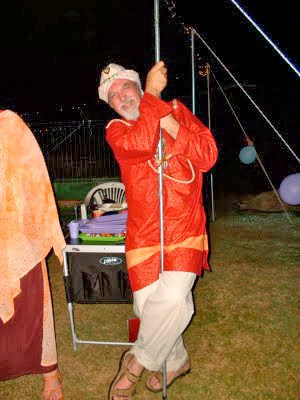 David a bit later on needing the support of a clothes hoist, and yes that is a snake up his sleeve. 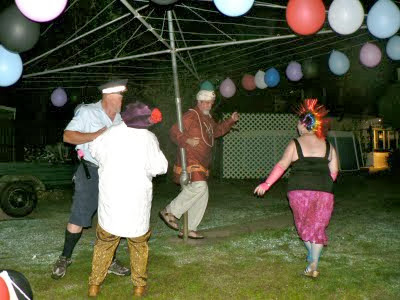 Who called the police? Oh, it’s OK, he was the host in disguise.

Before we left, our hosts shot off to Tassie for a few days leaving us in charge of their house, liquor supplies, BMW etc. Living in their house, driving their car and raiding their fridge felt like identity fraud.

When we eventually dragged ourselves away, we had been gone 4 weeks and did 4500 km, which is a very long way for a birthday party. We would have been away longer but it was very hot and humid and you just can’t do sight-seeing when it’s over 40º. 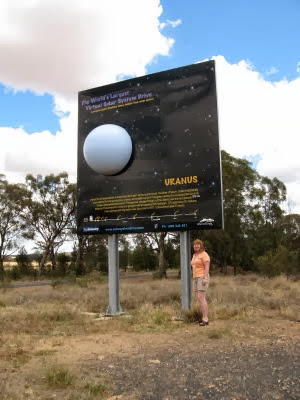 Part of the worlds largest Solar System Display, near the Warrumbungles National Park, around 100 km across, centred on the Siding Springs Observatory.

As it was, we did do some 4WDriving in a rain forest in the Border Ranges National Park, where Janet collected a leech on her foot, a tick on her leg and saw a snake close up, too close in her opinion. We also visited our friends Tim and Brenda in Byron Bay on the way back, and returned across the Barrier Highway through some stunning desert scenery between Broken Hill and Cobar. 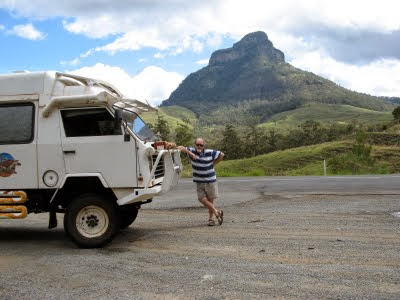 A roadside stop in southern Queensland, (which is not between Broken Hill and Cobar).

On the way to and from Brisbane (which is more than a week’s drive each way), we stayed at a delightful free campsite alongside the Gwydir River in the town of Bingara, in northern NSW. The town’s forward thinking council are actively attracting motor homers to come and stay in the town for free, in the expectation (accurate as it happens) that they will patronise local businesses and keep the town alive and thriving. We fully support that kind of RV Friendly symbiotic environment. 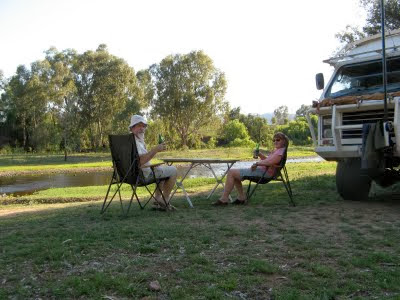 The Gwydir River campsite in Bingara.

On our trip we managed to check out our new antenna for the HF radio in our Oka. It’s a 9 m high fibreglass telescopic whip antenna to enhance our communications abilities when we are remote from civilisation, which we seem to be most of the time.

9 m might seem a tad large compared with your average car radio aerial, but when it comes to HF radio transmissions, size definitely does matter. We do, however, have to maintain a keen watch out for thunderstorms as it could be attractive to lightning. In a thunderstorm, you don’t want to be the tallest thing around.

For the technically minded, 9 m happens to be a 1/4 wavelength on our primary communications frequency of 8.022 MHz which is the optimum length for effective transmission. It can give us a communications range of up to 3,000 km, far enough to seek assistance from any part of Australia. 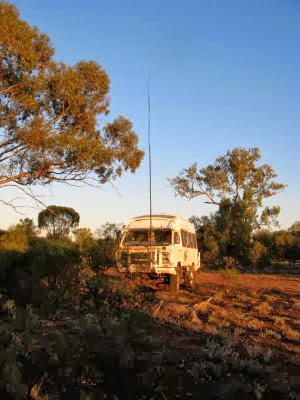 Our 9 m HF antenna raised in a bush camp at dawn somewhere in outback NSW.

(Actually I know exactly where it was, and so I should with all the technology at our fingertips. It’s location is S31’ 33.72”, E146’ 55.19”, which is 25 km west of Nyngan, in bushland about 1 km south of the Barrier Highway, across the railway line and left at the next bush). 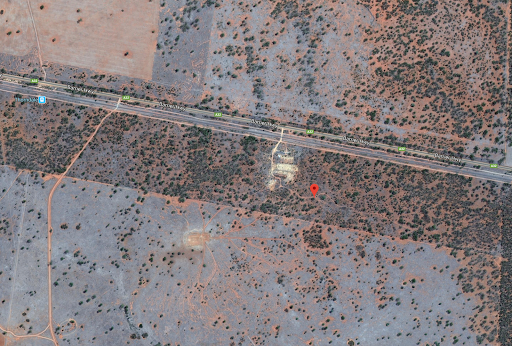 One of the other nice places we stopped at on the way back was Peterborough in the mid-north of South Australia. They have an excellent railway museum there with a round house, engines etc, but unfortunately no working locos at the moment.

It’s ironic that the main Trans-Australia railway passes through the town but you can’t actually go there by train. I’ve asked them to fix that. 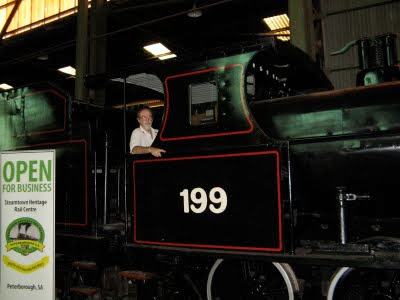 What any small boy would want to do.