After the Lakefield National Park we were a bit apprehensive about the Battlecamp Road into Cooktown. The last time we were on it, it shot to the top of our Worst Roads in the Country list, but it has since been graded and widened and is now a very smooth gravel road, and even sealed over the hilly sections. 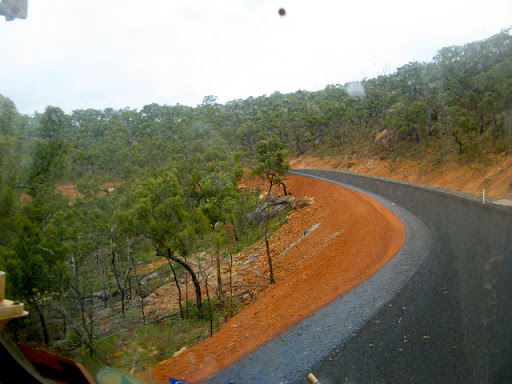 The newly completed Battlecamp Road (sealed over the hilly sections only).

A few metres of Armco wouldn't go amiss, the sides are very steep.

We spent a few days in Cooktown which we last visited in 2005. We assumed that the subsequent sealing of the road from Cairns would have had a major impact on the town with caravans and motorhome filling the streets, but luckily its impact has been fairly minimal. Life goes on in its quiet way but this time the weather was against us, and everyone else. It was extremely windy all the time and showered quite a few times. 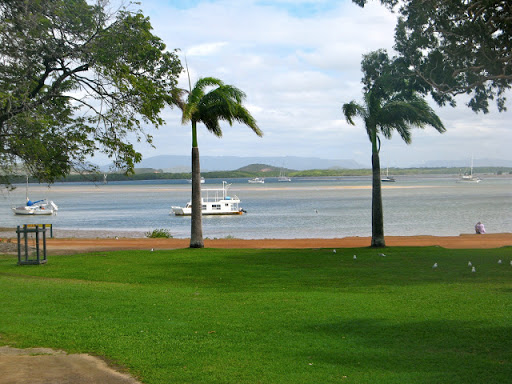 But we did explore the botanic gardens (set up to stop the spread of nearby Chinese market gardens) and watched a few sunsets across the same unspoilt bay that Lt James Cook (he was not Capt. until much later) would have seen in 1770 when he beached (careened) his ship the Endeavour for repairs after "finding" the Great Barrier Reef, and finding that it was very hard on his ships bottom. He named the river after his ship and was the first explorer to see the "kanguroo", which he said tasted very nice. 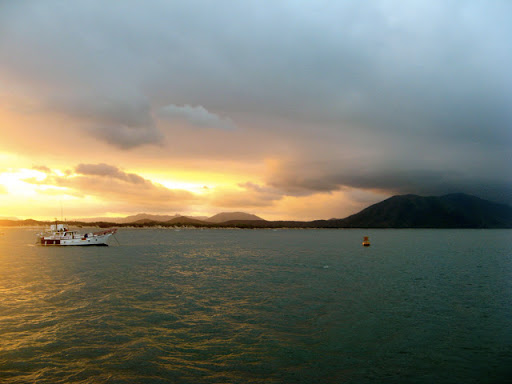 The Endeavour River, just as Lt Cook would have seen it.

We visited several "exact" spots where Lt Cook beached the Endeavour and all of them looked plausible. Certainly the river and it's far views have not changed in 240 years. 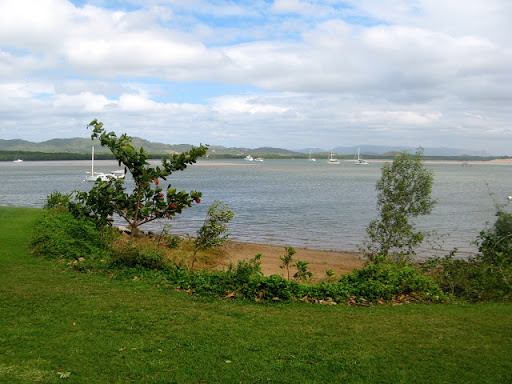 The "exact" spot where Lt Cook careened his boat for repairs... 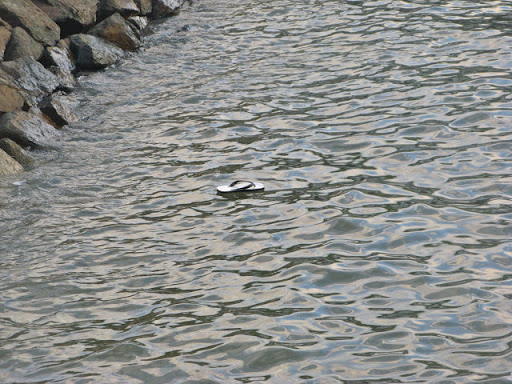 ...and we even found Lt Cooks original thong.

And Janet mounted the exact steps which HM QE the 2nd used when visiting Cooktown in 1977, only Janet had mislaid her tiara. 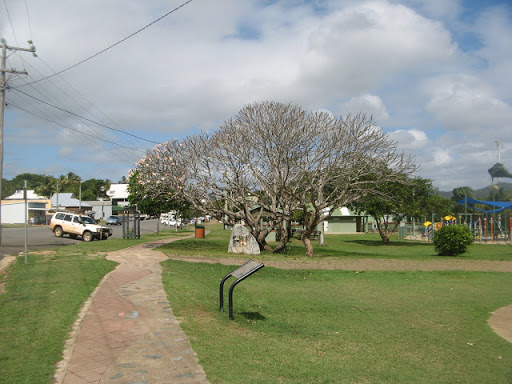 A huge frangipani tree in Cooktown

Each year the Cooktown historical society holds a reenactment of Cook's landing on June 17th 1770 to repair his ship which had been seriously damaged on the barrier reef. Until a couple of years ago, this had been a purely European celebration but for the past 2 years and for the foreseeable future, the celebration will be shared with the local indigenous people as they commemorate the introduction of European culture as well as sharing their own with Europeans. This is the first time we had seen such an integrated approach and wish that all Aboriginal communities would accept the same philosophy. The people in Cooktown, both European and Aboriginal, seemed to us to just be Australians, the first time we had experienced this. 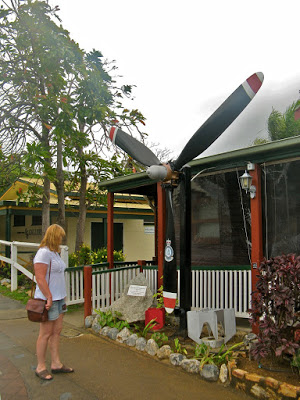 A propellor outside the RSL in Cooktown

Half way between Cooktown and Mareeba our troubles started again. The alternator started making loud screeching noises which we I fixed by removing the alternator belt. We had the alternator bearings fixed in Mareeba. Also a relay started clattering behind the seat. I finally found the source of these and our starting problems, a wire was loose in a connector and only making intermittent ground contact.

(For the technically minded, there were 2 relays with common coil pins connected together and thence to ground. But when the common ground wire is broken or intermittent, all sorts of indeterminate currents can flow, turning the relays on and off, but it still took a frustrating week to track down).

Then today we had a wheel bearing replaced since it was getting a bit rough and noisy. I would have done this myself had we been in a remote location but Mareeba is very well supplied with services and shops so we sat in the cool of the library while it was done. A free-wheeling hub is also clicking so I dismantled it and found nothing much wrong. It will need some more investigation later but is not considered serious.

But tomorrow we are heading off west and will ignore all noises for the foreseeable future.

Yesterday we popped down into Cairns for a couple of hours. We had to visit an electronics store for some LEDs and bits and pieces to do some electrical repairs to our lights. We had lunch on the foreshore (I hesitate to call it "beach front" since the beach consists of 2 meters of imported sand and hundreds on meters of mud). Not very attractive even the though the foreshore is beautifully landscaped and manicured. Popping back up from Cairns is not so easy and it's a long drag on winding roads up the Great Dividing Range past Karunda. 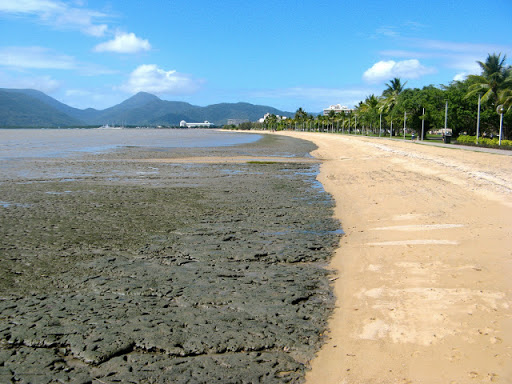 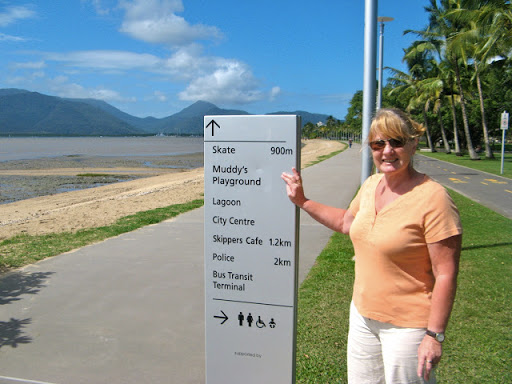 ...and an appropriate name for it too.

Today we visited a very good private war museum in Mareeba, The Beck Museum, with missiles, tanks, lots of old aircraft and a very knowledgeable owner, a Mr Beck. He had an Ikara missile there, the guidance electronics for which was manufactured by EMI in Adelaide when I first started work there in 1975. See http://www.exploroz.com/Places/77920/QLD/Beck_Aviation_and_Military_Museum.aspx 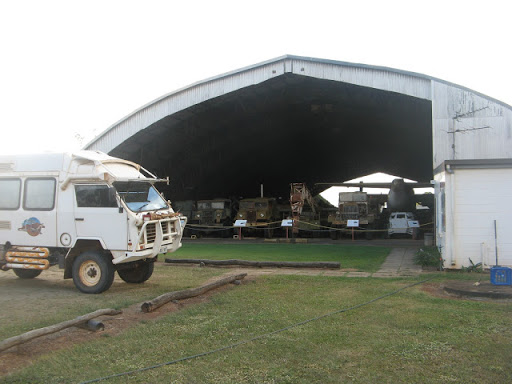 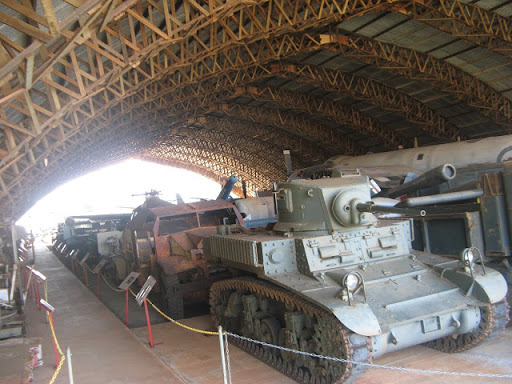 Tanks, planes, engines and even a WW11 hanger at Becks War Museum... 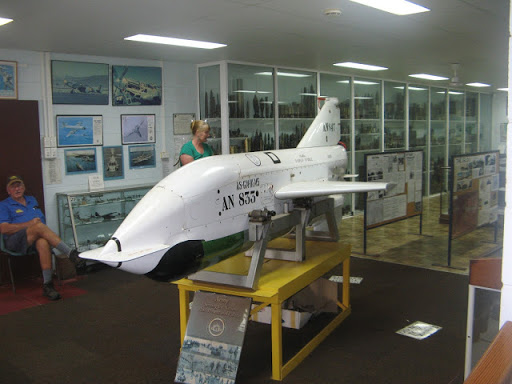 ...and an Australian designed and built Ikara missile.

The world's first cruise missile and the only one in a private collection.

It flies low towards a target and drops a torpedo by parachute.

And it worked, it was fitted to several Australian, British and Brazilian warships.

Last night we went to Granite Gorge (see http://www.granitegorge.com.au/activities.html) where there was a lot of granite (obviously) but it's also home to a species of wallaby endemic to Granite Gorge, the "Unadorned Rock Wallaby". They were very friendly and approachable and many were pregnant. Being unadorned obviously hasn't affected their attraction one bit. 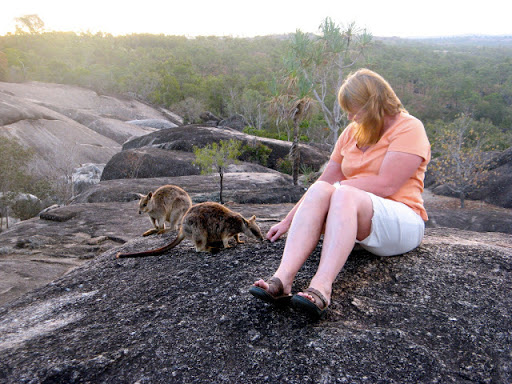 "Unadorned" they maybe but they still look pretty. 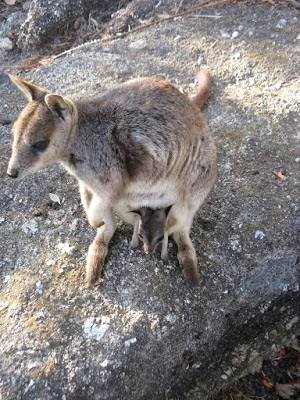 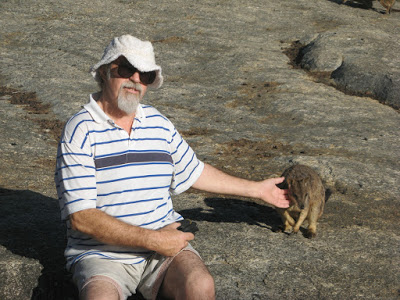 Oh yes, Janet also did the washing and shopping.