We only achieved 8.8 km today, partly due to a blowout of Dave’s rear left tyre and partly since it wasn’t far to the today’s destination, the McLarty Hills, but it still took most of the day.

Dave noticed his Oka was leaning a bit ascending a sand dune (which is not unusual on this terrain) and when he investigated, the rear left tyre was missing completely. He’d been driving on the wheel rim after the tyre had rolled off rim and was left 30m behind his Oka.

One tyre track, one rim track: 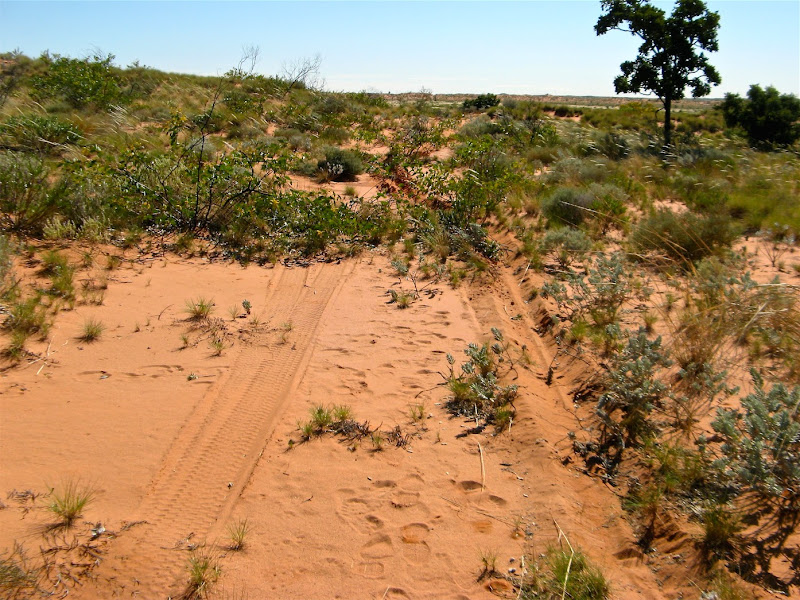 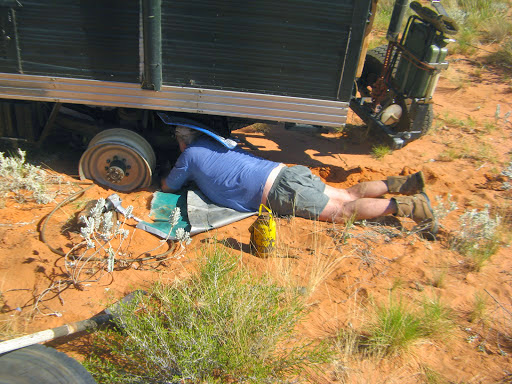 Secret mens business as Dave does things under the Oka. Actually the tarp is to keep the wind blown sand out of his face while he manipulates jacks under the axle: 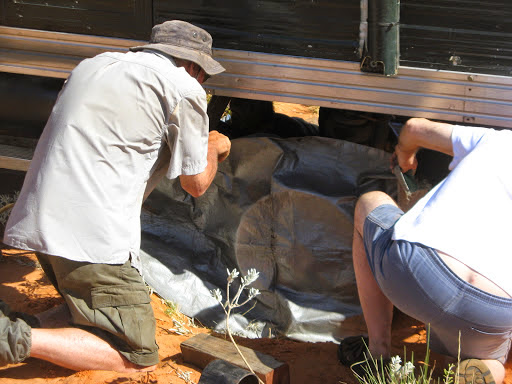 After a hot and laborious exercise the wheel was replaced, but the expensive but totally destroyed tyre had to be abandoned in the Great Sandy Desert, sadly there was no hope of repair to the ruptured sidewall.

We left the tyre leaning against a Desert Walnut tree (Owenia reticulata), which are iconic desert trees found all over the Great Sandy Desert area: 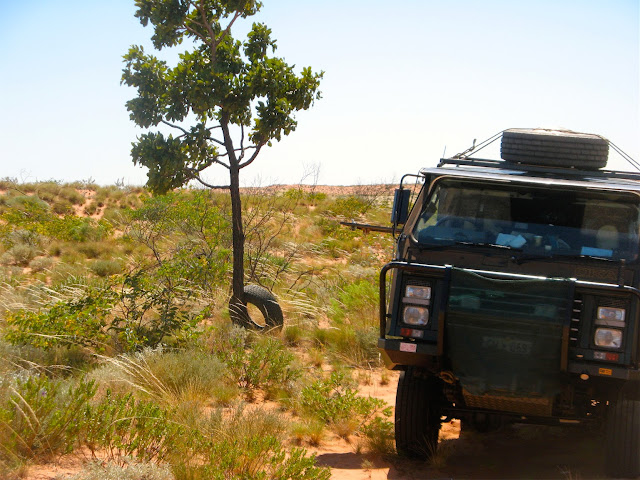 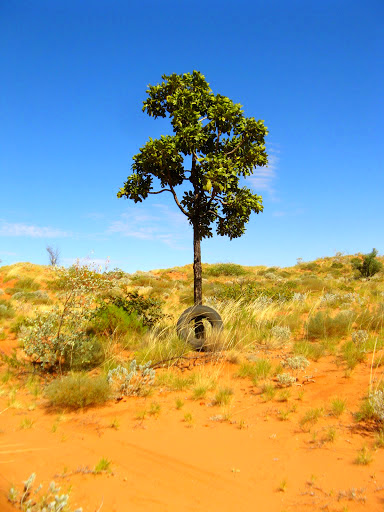 After forging a track through the scrub we reached and explored the Mclarty Hills, scene of some historical events:

Both of these men travelled in this area and left their names etched somewhere in a rock face in the McLarty Hills. It would be a daunting task to find them in such a remote place with only scant location information to go on. Previous expeditions had tried to find them and failed, but we gave it a try.

Below is an 11 minute video of us “forging the track” towards the McLarty Hills on the 4th Aug. after turning off a known cut line.

It was a fairly easy task but at 8:20 into the video I hit a small termite mound (or some such solid object) hidden in the spinifex (you can hear a loud bang). Luckily no damage was done but it’s one of the risks in “forging tracks”.

This is good example of a hidden obstacle, a small but very hard termite mound hidden behind a spinifex clump: 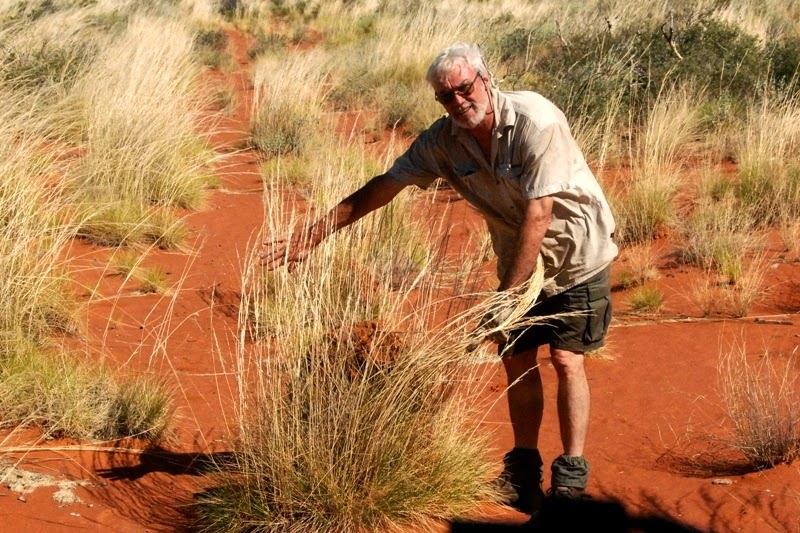 At this point we were pretty remote from help, more than 250km in a direct line (and 6 days travel) from any nearby community (Sandfire, Broome or Fitzroy Crossing), so a major breakdown here would at a minimum be very inconvenient but could be a major setback, resulting in the towing of a defunct Oka several hundred difficult kms to the nearest highway.

However, we did log in on our HF radio every night giving the base operator our exact coordinates so they would know where to start looking if we ever broke down or disappeared. It has happened, 2 members of the original Calvert Expedition disappeared in this area in the 1890’s and their remains were only located 6 months later.

Somewhere up in these hills we hoped we could locate some historical names engraved in the rocks. Our only information was that they were thought to be in this range somewhere:

We clambered up and around the rocks for a couple of hours with cameras and binoculars but failed to find what we were looking for, which didn’t really surprise us given the area to be covered. However we did find a few interesting Aboriginal artworks in the caves.

An emu foot print and a coolamon or possibly a shield: 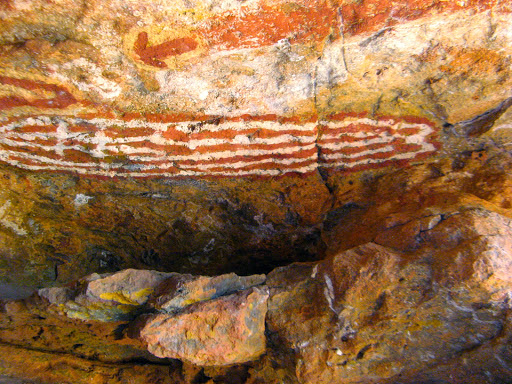 This a fish drawing in an area devoid of large bodies of water: 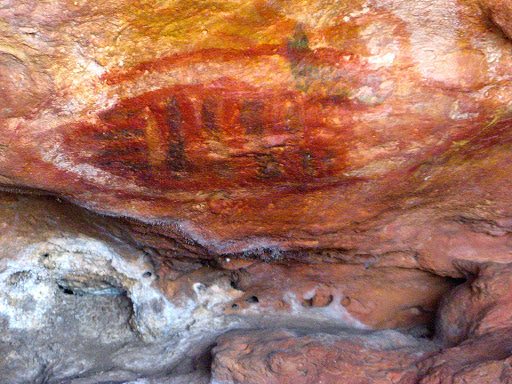 Possibly a map showing the links between water holes? 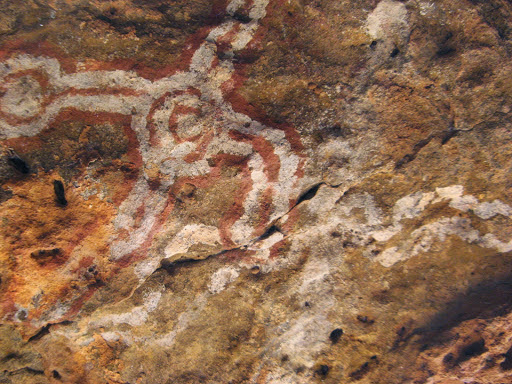 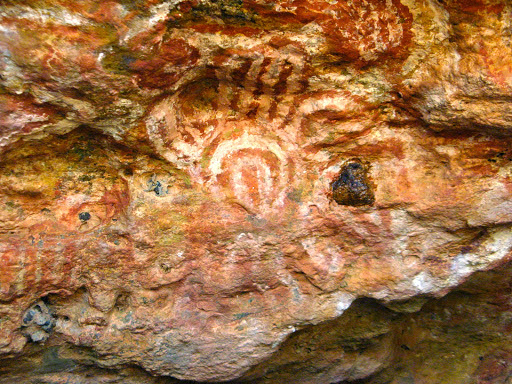 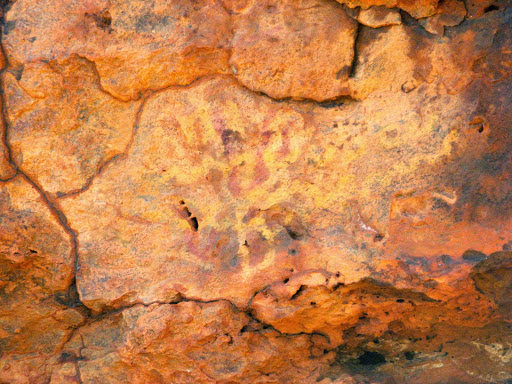 We made camp at the foot of the McLarty Hills in one of the most remote areas of the country we have been to. There are no tracks in this part of the world, we had to make our own: 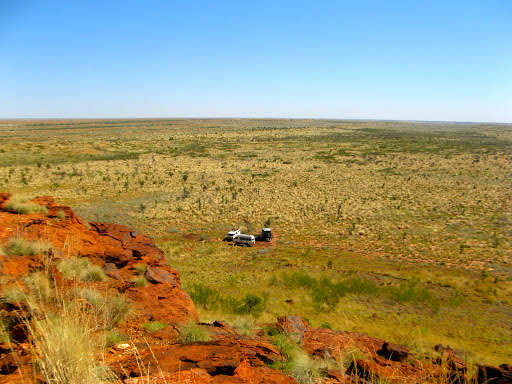 There are a few other small hills scattered around the McLarty Range which is spread over around 100 sq km of desert:

This morning we checked our free wheeling hub screws in advance of setting off again. Dean’s were loose and Dave’s slightly loose, mine were OK because I’d had this problem before and fitted a retention device after a complete hub fell off on a previous trek, leaving us without 4WD.

Very cool breezy morning so we had bacon and eggs inside for breakfast (we found some bacon hidden in the back of the freezer) with toast and marmalade, even china cups for our tea. Despite our very remote location, we certainly don’t rough it on our travels, we do eat rather well wherever we might be. 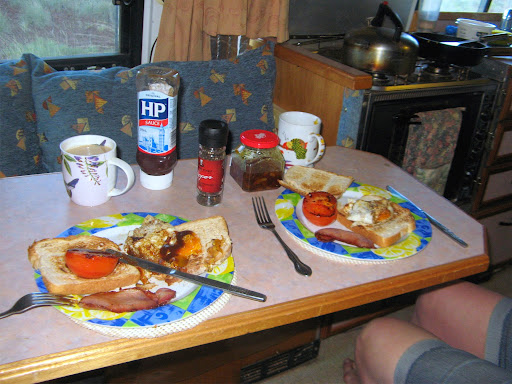 Later, before we moved on, we went for a final halfhearted attempt to look for the engraved rocks but inwardly resigned to failure, when suddenly, eagle-eyed Kaye spotted them when everyone else didn’t.

The engravings were lower down and a lot smaller than we had been expecting, only a few cm tall, but still surprisingly distinct considering how long ago they had been made (78 and 48 years ago respectively). Dave was rapt that “we” had found them when others hadn’t: 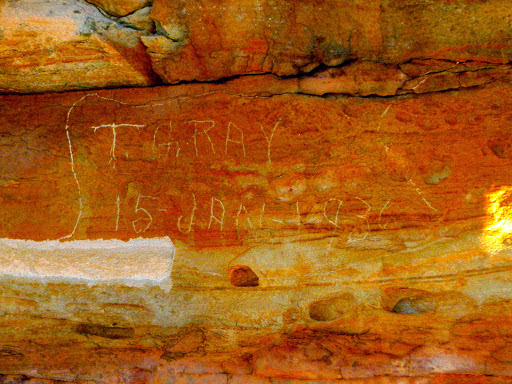 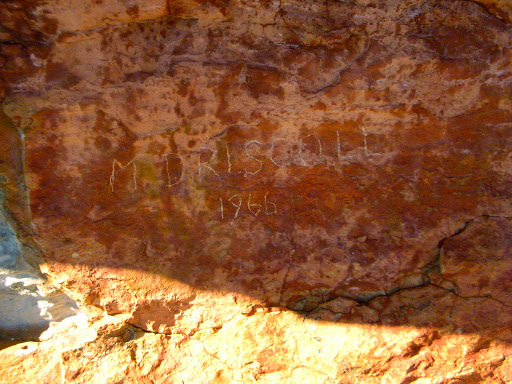 Dave looking justifiably proud that we’d located the rock signatures, something he had been planning and hoping to do for many years: 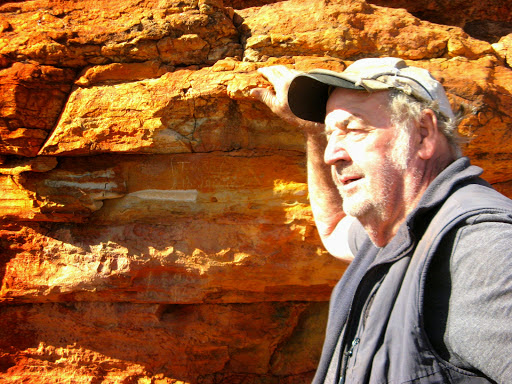 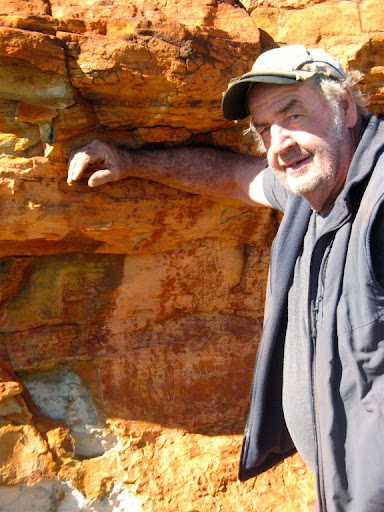 Having successfully achieved one of our major objectives (but with a little bit of good fortune, because the engravings were very small inscriptions in a very large desert), and with hopes raised high once again, we left the McLarty Hills and headed west between sand dunes towards the Dragon Tree Soak in a convoy of Okas. See “Mclarty Hills to Dragon Tree Soak”.